The 5 Lessons You Must Know about Cliches in Writing 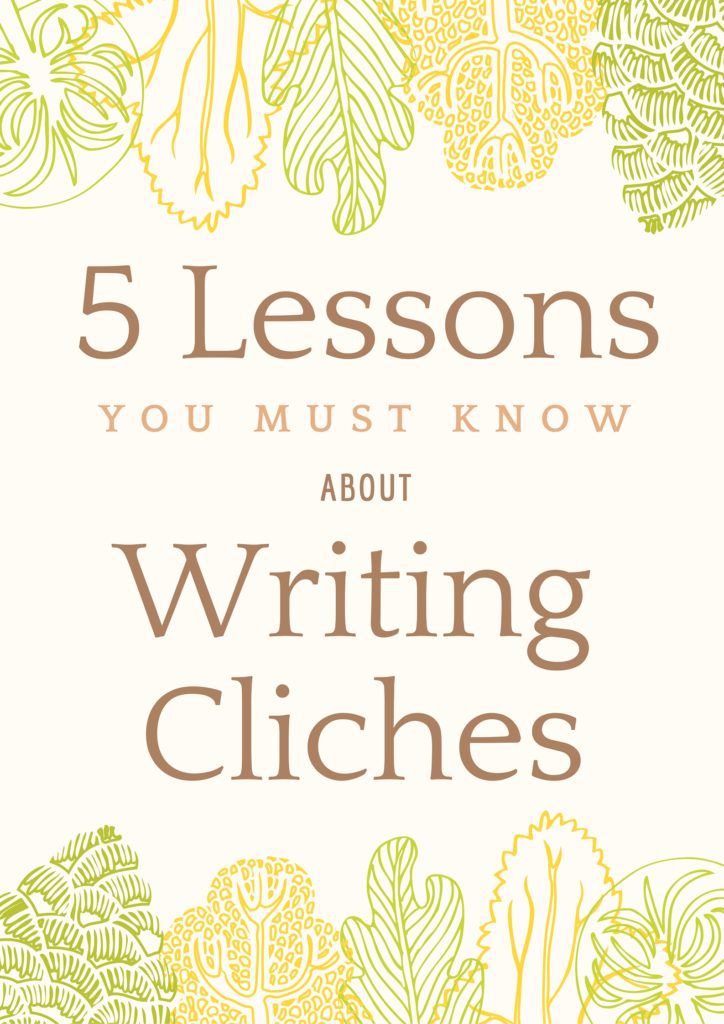 How many times have you heard “when it rains, it pours” or “everything happens for a reason”? These clichés are like a broken record (cliché intended).

Clichés are phrases or sayings that have been overused and said too much and completely lack originality. As originality is key in any sort of writing, especially creative writing, clichés are the enemy for writers and should be avoided.

When you’re weighing the option of using a cliche in your writing, ask yourself this question: can you say something better than something that has been said for hundreds of years?

It’s a high bar, I know. But that’s where the power of being a true writer comes out. No person can tell your story better than you, the one that came up with it. Use your words to tell your story, not a phrase that is thrown into every classic.

I’m going to walk you through 5 different lessons about cliches, including what you can do to keep from falling into their trap, and the good ways to use cliches.

1. Why Cliches are Bad to the Bone

As a writer, being unoriginal should be your mortal enemy. By using a cliche, you are recycling old words. If you wrote something with words that have been used before, what makes yours stand out?

Using cliches is a little bit like minor plagiarism. You’re stealing from culture at large and the English language. There’s no need to steal when you have such a wealth of language to mix and match in original ways.

Cliches show the reader that you didn’t want to work at writing. You were going through the motions of the storytelling by just grabbing the first thing that popped in your head that your grandma never fails to say to you.

It’s not just aspiring writers that fall into the trap of cliche sayings or phrases. You run into them in many published novels by popular authors, and might not even notice it just because you are so used to reading the phrases.

Examples of Cliches in Popular Literature

Let’s just kick it off with the most common cliches that make me feel like I’m going to be whisked off into a world of dragons and distressed princesses. Even though this is not used in the same “fairy tale” context that we normally heard as a kid, it is still a reference to time that has been worn out for years and should be left in the books for two-year-olds. Other possible lines that Patterson could have used was “at one point” or “at some point in time.”

Making our way from the world of fairy tale cliches to the world of campfire story cliches. I get that she was trying to set the tone for a creepy and mysterious event, but there are plenty of other ways to accomplish that without making me feel like I need a s’more right this instant. “The rain was coming down in sheets from the clouds in the night sky” is an alternative that still depicts the same scary atmosphere without the overused adjectives.

Despite being the author of the  best selling series of all time at over 450 million copies sold, even the esteemed J.K. Rowling has used a cliche or two. The phrase is meant to create a threatening tone, but it’s been so overused that it comes off as creating a superior feeling from the person saying it, while also making the reader find the character to be pretentious.

This has to be the most overused advice in the history of language, and I do my best to avoid using this phrase when my friends are going through a tough time. It sounds all deep and caring and “wise beyond your years,” but it just ends up sounding like it came out of a stock advice column.

2. The Storytelling Cliches that Add Insult to Injury

There are cliches of language, but there are also cliches of plot. Both are to be avoided.

Cliché plots are storylines that have been done time and time again such as the good girl falling for the bad boy or best friends falling in love. These are much easier to avoid than language clichés because it’s often very clear if your plot line has been done before as you start to plan and write it.

3. When Are Cliches as Good as Gold?

There are very few instances where a cliche won’t make the reader roll their eyes and think sarcastically, “Oh, haven’t heard that one before.”

There are a few loopholes in writing that can make a cliche okay to use.

Stating it for the reader

If you point out that the cliche is PERFECT for the situation before saying it, then you are preparing the reader for something that they have read a million times, and confronting the fact that you are using words that have been worn out for years in order to prove a point.

If you mention that the cliche is ridiculous but effective, you are addressing the fact that you are aware of how outdated the words are, and that gets you off the hook.

If it’s the only option

Why fix what isn’t broken? If you rack your brain trying to find a better way to say something, a cliche might be your last resort. Using a cliche might sum up your point/emotion better than something that you threw together when you couldn’t think of anything else.

If you want to write something that is easy to get through with minimal analyzation from the reader, cliches might be the way to go. They are playing it safe and nearly all readers can comprehend them.

Making it your own

Cliches aren’t copyrighted or set in stone. Feel free to twist the words to make it updated, relevant, and all your own. Instead of saying “better safe than sorry,” you can say “better to be safe now, than regret it later.” Another example is to say “go an inch, foot, or even mile further” instead of the simple “go the extra mile.”

Cliches are like a trap that nearly every writer falls into eventually, even if you don’t realize it. With hundreds of phrases that have used up and worn out, how can you NEVER be enticed to use one?

I’m going to give you a few examples of lines that I have used in my writing in the past instead of cliches. This is just to help you get a sense of other ways that you can spin something. I hope that when you see my examples, it will inspire you to rethink the cliches that have tempted you in your own writing.

If you want to thrive as a writer, you have to twist and stretch your creativity to the best of your capability in order to be original.

A few other tips:

Use one now, substitute it later

Every writer knows that you rarely get it perfect the first time around, and you have to expect multiple edits and drafts of your story. If you like the way a cliche fits into the story, add it in the first draft and change it later when you think of something original that has the same effect.

Use the direct approach

Cliches are often poetic and deep, which might be more than you need in many literary situations. You can always be direct with the reader, and say exactly what you mean.

Don’t say them and you won’t write them

We are all guilty of saying a cliche saying every now and then, especially when we are comforting someone or giving advice. If you continuously use cliches in your spoken speech, it will be hard to resist using them in your writing. If you quit saying them, you can quit writing them.

Don’t surround yourself with cliches

If you know someone that uses a lot of cliches, they might be influencing your writing without you even realizing it.

Just because a successful author uses cliches in a best-seller, that doesn’t mean that you should follow their example. If you read an author that continuously uses cliches, you should avoid reading too much of their work before their habit rubs off onto the pages of your writing.

5. Against All Odds, Writers Should Try to Create Cliches

Don’t use old cliches, be the one that creates new ones. Be a writer that creates such a catchy and relevant phrase that people use it for years down the line.

Think about how cliches were born — they were created by some of the most influential writers in history. In these instances, clichés are actually beneficial as the stories wouldn’t be as memorable without these sayings or phrases. For instance, William Shakespeare created some of the most popular clichés in writing through his plays and sonnets.

While you should aspire to reach the fame and recognition of the great Shakespeare, do not use his cliches to get there.

10 Cliches That Originated from Shakespeare:

You have the ability to substitute the overused sayings for those of your own invention. There is always more than one way to say something, so don’t take the words that have been said by a hundred mouths before.

For your own amusement and education, here is an extensive list of cliches that you should be wary of in your writing.

681 Cliches to Avoid in Your Creative Writing