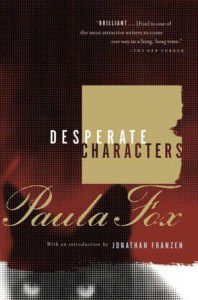 Jonathan Franzen was wrong about many things. About Oprah’s book club. About the value of Twitter. About the quality of Freedom.

But he was not wrong about Paula Fox. Franzen championed Fox (no relation to your proprietor) early in his career, before he published The Corrections, talking her up in essays in Harper’s and writing the foreword to her most famous book, Desperate Characters. He even placed her above the Mount Rushmores of American fiction — Roth, Bellow, Updike.

Desperate Characters is fantastically intense, layered with levels of innuendo and symbolism, even as the surface storyline — a woman, bitten by a cat, fights with her husband — is relatively quiet.

I’ll give you the last two lines. Context: Otto is fighting with his wife Sophie. Sophie has been bitten by a stray cat and is bleeding.

“Shut up!” said Otto. He put his arms around her.

Why is this such a good last pharmacy online onhealthy line? For one, it’s a fantastic place to end, because we’re cut off in the middle of the action. It’s a great lesson not to close a scene at a dwindling point, but right at a high moment of a fight.

On my second reading of the novel, I appreciated this line even more. The second time around you can see how well this line portends what is to come. It hints at the couple’s estrangement — she’s already telling him not to get too close. Plus, the danger of fluids foreshadows the ink of the final page.

It also tells you who Otto is: the type of lawyer who doesn’t want to get dirty, to lower himself to the lower classes (as opposed to his partner Charlie). Since the cat represents lower class society in the novel, Sophie knows that Otto doesn’t want any contact with the cat’s blood.

It’s ambiguous whether this last line is a warning or a promise. On the surface she’s appearing to ward him off. But it could also be construed as the promise that she will get blood on him, that through the course of the novel she will get him messily involved with the lower class.

Even though I picked this line to tease out the implications, I could have picked any line. Fox is that rich of a writer. Franzen said that he’s read the book so often that nearly every single line has been highlighted or commented upon.