Garrett Calcaterra on E-books and E-publishing 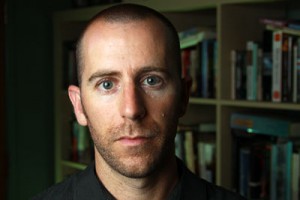 Garrett Calcaterra is a fantastic editor and writer. I should know: I’ve been in a writing group with him for the last five years. I’ve got a lot of respect for him because he works harder than anyone else I know, both at writing literary fiction and fantasy/speculative fiction, not to mention all the editing he does on the side. This week he dropped his third novel — Dreamwielder, a fantasy novel – which is being released as an e-book by Diversion Books. I caught up with him to ask him about his journey to publication and the current landscape in e-publishing.

Will you describe your publisher and why you chose them?

My agent and I decided to go with Diversion Books, an e-book only publisher. When the big, traditional genre publishers passed on Dreamwielder, our choice was to either go with a smaller indy traditional press or go with Diversion. It wasn’t an easy choice. I’m a bit of a traditionalist when it comes to books—I like to hold the real deal in my hands as a reader—and as an author, the dream is always to see your book on bookshelves in proper bookstores. Realistically though, I knew none of the smaller presses would be able to get wide distribution of the book in print since I’m a relatively unknown author, and the thought of my book slowly dying the death of anonymity and bookstore returns wasn’t all that appealing. Diversion has a great relationship with the e-book vendors, and they know the business of moving copies, as evidenced by their low price point of three bucks for a book. Because Dreamwielder is a fantasy novel written for mass consumption, the choice was pretty obvious when I looked at it rationally: Diversion gave me the best shot to reach a wide audience. So far, so good. The experience has been wonderful. Their editors and staff have been super professional and a joy to work with, and they move fast! With a traditional press, you’d be looking at a year or two after signing a contract before the book finally hits shelves. I just signed my contract with Diversion back in December and the book is already out four months later. Crazy!

What do you see as the advantages of e-publishing? 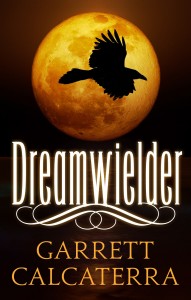 The most obvious advantage is the low cost and low risk. Publishers no longer have to pony up thousands of dollars to do a print run of a book and then ship it out to retailers with the guarantee of reimbursing for returns. This allows publisher to take a shot on unknown authors and test them out, so to speak. In the same way, it lowers the price of books and allows readers to test out new authors without much risk. It’s a win-win situation for everyone. I think we’ll see the ratio of e-books to print books start to even out over the next year, and my educated guess is that we’ll see more authors going the same route I’m going—get your foot in the door with an e-book publisher or imprint, and then if you can show some proven sales, you’ll earn a print run and wide distribution in brick and mortar stores. Barnes & Noble might go tits up eventually, but I’m confident that there will always be bookstores and people will still want to buy books in print from their favorite authors.

What do you think Amazon, Google, and Apple might do if authors start cutting out the vendor en masse?

Frankly, I’m not too concerned about any of the big vendors—they’re doing just fine and will continue to do so. Even once more authors and publishers start selling e-books directly from their websites, I still see the majority of downloads going through the big online retailers. It’s simply easier to download directly to your Kindle from the Kindle store. Having said that, I’m sure Amazon, Google, and Apple will still participate in all kinds of borderline illegal tactics to get a competitive edge. Apple already got busted for colluding with publishers, Amazon handcuffed thousands of authors with its KDP Select program, and Google is at the forefront of outright stealing thousands of copyrighted works by claiming they’re “orphaned works.” These are the sort of things authors, publishers, readers, and lawmakers need to keep an eye on. I’m very free-market minded when it comes to books. The more options we have when it comes to publishing books as authors, and buying books as readers, the healthier the book world will be.

I know you write both literary fiction and genre fiction — do you think the e-publishing world might work differently for those types of writing?

No, I think they work pretty much the same. No matter what you’re writing—genre fiction, literary fiction, YA novels, memoir, non-fiction—it’s all about having a platform and building a following. You’re selling a product and you have to market it as such in this competitive marketplace. So, for a literary novel or collection, your target audience is going to be different, and your branding as an author will have a different look and feel, but the process is the same. Luckily for me, speculative fiction readers are traditionally very open-minded and avid readers, so I’m not too concerned about starting out publishing genre books and then veering over into the literary world from time to time. If Dreamwielder does well and readers like it, they’ll happily give my next novel a whirl, even if it is largely a literary novel and the speculative fiction components are minimal. That’s my hope, at least!

How have you used downloadable short stories to promote your novels?

Well, I don’t know how successful I’ve been at it so far, but the idea is to have a lot of material available to readers and to try and build a larger readership. It all boils down to trying to find a larger audience; that’s why authors write after all, is to have people read and enjoy their creations. By offering short reads at a cheap price directly from my website, my goal is to introduce new readers to my work. The reality of it is, though, there are a lot of choices out there for readers—including many non-reading activities like the accursed game Words with Friends—so it’s no easy chore trying to grab the attention of new readers. My hope is that the e-book singles store and my full-length novels end up being a two way street. If I can lure some readers into the singles store with a free promo and they fall in love with my writing, awesome, they’ll likely go buy one of my books. Conversely, if someone finds one of my books on Amazon and enjoys it, maybe they’ll do a Google search to find my website and download a few of my stories. I make few bucks that way, and the reader stays satiated while I scramble to finish up that next novel.

And what is that next novel?

My new work in progress is a near future literary/spec-fic novel tentatively titled Remember the Future. Unlike Dreamwielder, which is a sprawling tale with a dozen or so viewpoint characters, Remember the Future is a tight, close character story. The main premise is that my protagonist, Cabel, is trying to make it as a hi-tech homesteader along with his wife and son, but a series of problems besiege them, everything from devastating weather and water shortage to infidelity and a growing lack of trust in their marriage. Punctuating all of this is the son’s spotty clairvoyance, which functions as a MacGuffin to stoke Cabel’s insecurity. Ultimately, Cabel has to figure out his life and problems just like anyone else; there’s no predicting the future. I’m very excited about it. It’s one of those rare cases for me, where I feel like this is the story I have to be telling right now. We’ll see how it comes out. Afterward, maybe there’ll be a sequel to Dreamwielder in store for me. Who knows? Thanks so much for having me!