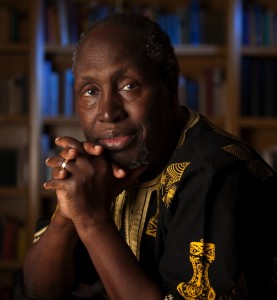 Ngugi Wa Thiong’o has had high odds for the last few years among pundits to win the Nobel Prize for Literature. This year he’s currently given 7/1 odds, just behind Haruki Murakami. Although we don’t have any official confirmation that the Nobel prize committee has been entertaining the notion of giving him the most coveted prize in literature, I’m positive they’ve been eyeballing him up and down.

Aside from the fact that his writing is world class, here are six reasons why he’s on the committee’s radar and why he should win the Nobel Prize for Literature.

Read some of my other posts on the Nobel Prize for Literature:

The Nobel prize committee loves political novels. And Ngugi Wa Thiong’o has never been shy about wading into political waters. In Wizard of the Crow, he satirizes a dictatorship. It’s the most ruthless skewering of a dictator since Mario Vargas Llosa’s The Feast of the Goat. Highlights: the dictator inflates full of hot air until he floats up to the ceiling; he contracts a sickness of “white-ache” (the desire to be white), he gives birth to a fake democracy. It’s got the magical realism of Gabriel Garcia Marquez and the grand scope of a Salman Rushdie novel. Also, in Weep Not, Child, his first novel, he is merciless on the British colonial rule.

If you tried to write a biography that would make the nobel committee weep and kneel and genuflect, you couldn’t do better than coming up with Thiongo’s. Imprisoned for his writing, critic of authoritarian governments, forced into exile, assaulted for his politics, started writing in English but switched to his native Kenyan tongue — the man is the embodiment of someone who has sacrificed himself for the sake of literature.

He hails from Africa, a place criminally underrepresented in the Nobel Prize. Other than J.M. Coetzee and Nadine Gordimer, both white South Africans, the Nobel Prize has only been given to two other writers hailing from the continent of Africa: Wole Soyinka of Nigeria (1986) and Naguib Mahfouz of Egypt (1988).

Compare that to the tallies of other continents: Europe leads the pack at 80 winners. 80 out of 111. That’s online pharmacy no prescription nearly 3/4th of the prizes. Makes the award seem rather insular, doesn’t it? (Horace Engdahl, eat your words). South America and Asia are closest to the low numbers of Africa, with six and five, respectively.

Thiong’o has written novels, essays, plays, short stories, children’s stories, journalism, and academic essays. I love that breadth. He’s done pretty much everything but poetry. The nobel prize doesn’t always go for breadth — they’ve awarded it to a number of single-genre writers — but it certainly doesn’t hurt to have such a broad span of work.

The nobel prize committee alternates between confirming the well-known (Maria Vargas Llosa) and anointing the unheard (Le Clezio). They do the former in order not to appear irrelevant; they do the latter from a mission to direct people’s reading toward authors they believe are deserving of a wider audience.

Ngugi Wa Thiong’o would be a middle ground between these poles. He has quite a reputation, but not nearly that of some of the more famous Nobel winners. Still, he’s hardly an unknown. After the relatively unknown Patrick Modiano won last year, and the popular Alice Munro won the year before last, maybe now it’s time for the middle course of a moderately popular writer such as Thiong’o.

He’s 77. If the committee doesn’t get on the ball soon, there is no guarantee that’ll he live long enough to get the award. There’s been a long line of embarrassing oversights in the Nobel Prize — Nabokov, Proust, Joyce, Proust, Chekhov, Borges, Tolstoy — and they wouldn’t want to add yet another to their list.

If you don’t buy that whole Thiong’o argument, then your best bet is to go for an American. There’s been a changing of the guard — Sara Danius is the new permanent secretary, which means Peter Englund is out. Peter Englund wasn’t nearly as anti-American as Horace Engdahl, but Sara Danius is rumored to be even more keen on Americans.

As far as Americans, the best bet is Philip Roth, both by my reckoning and by Ladbrokes (he’s rated at 8/1).

For the latest in Nobel Prize for Literature news, make sure to read up at The Literary Saloon and also at The Fictional Woods.