An Open Letter to John MacArthur 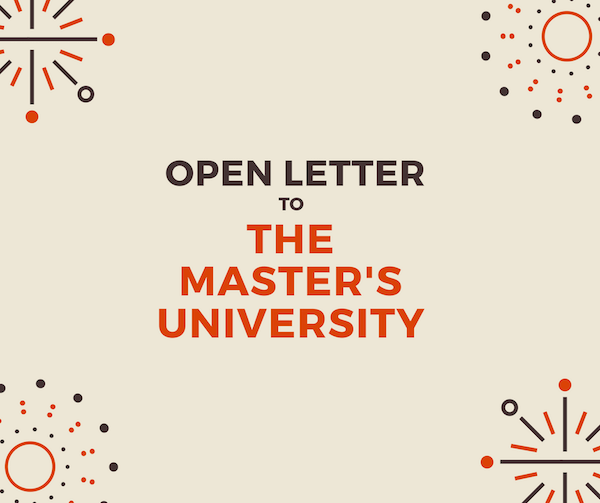 I attended The Master’s College (now the Master’s University) from 1997 to 2001. From 2003 to 2005 I also taught there in the English and Communication departments.

I am deeply disturbed by the news that the accreditation agency WASC has put the university on probation, and am writing this open letter to John MacArthur, the school board, and the students and alumni to demand reform.

END_OF_DOCUMENT_TOKEN_TO_BE_REPLACED

The Famous Graffiti Wall of What People are READING:

Everyone was disoriented because of the location change to USC:

Jonathan Lethem is absolutely brilliant. Best session of the weekend. And Carolyn Kellogg did an excellent job interviewing.

After the “Future of the Book” panel, there was a madcap rush to the stage to accost and interrogate the panelists. Definitely the most mobbish event of the weekend.

L. Ron Hubbard hired cowboys for promo. The message: He will lasso you and force you to read his books!

A tribute to the shift from UCLA to USC. Write on, Fight on.

Festival of Books: Exiles and Outsiders

Donna Rifkind did an excellent job introducing the books of each writer in one quick introductory swoop, so the panel could discuss their ostensible topic: Exiles and Outsiders. I’m sure it was just a coincidence that this panel had four female writers.

Gioconda Belli was literally exiled from her native Nicaragua because of an unfriendly dictator. She’s currently writing about the exiled by retelling the Garden of Eden, casting Adam and Eve under a wildly creative but careless and forgetful God.

Dylan Landis preferred the term Outsider compared to the term Exiled, though she lives by the advice from Denis Johnson: “Write naked, write from exile, write in blood.” She also praised the role of the exiled: “I don’t think you can write a novel if you don’t feel like you’re in exile, and you can’t have a protagonist who isn’t someone who’s exiled.”

Aimee Bender argued that part of the writer’s job is to try to see fresh and new, and language hinders that, because writers have conflated the terms with the thing itself: “We look at a sparrow and call it sparrow, but we don’t realize the wonder of how that word correlates to the actual bird. We don’t realize the division any longer.” So the writer’s job is to step outside, in order to get a fresh vision of language and of the world itself. Without that step outside, language impedes the new.

Mary Gaitskill dug into the meaning of the word outsider. “I used to feel like I was an outsider, when I was a child, and even now, as an adult,” she said. “But I think I was flattering myself.” She continued to say that even if you get shut out of some worlds, you can always join others. “The fact that we are here means we’re not outsiders,” she said. “We’re here at the LA Book Festival, we get our books published. If we were true outsiders, we wouldn’t get our books published.” She picked an extreme definition of the word outsider: “I think there are outsiders, but those are the people walking down the street screaming with their pants around their knees.”

About halfway through the panel, Gaitskill and Belli got into a bit of a rhetorical skirmish. They interrupted each other and complained about interruptions; they disagreed and quibbled about definitions.

Belli sought to clarify Gaitskill’s terms, arguing that we have to distinguish between outsider and alienation. After all, she said, American culture is hostile to emotions. In Latin America, intimacy comes much faster than here.

Gaitskill brusquely disagreed. She thought Americans go crazy with intimacy. She claims anyone will tell anyone anything, even something extremely personal.

Belli took issue with that, and tried to define how loneliness is intrinsic to being human.

Aside from the bout of knocking heads, everyone agreed that the novelist must write from a position separate from the majority. Although I found Gaitskill rather acerbic, I agreed with her that writers enjoy inventing an ostracized notion of themselves. They imagine themselves on far-flung fringes while firmly wrapped within the folds of the establishment.

The surest evidence of the allure of exile and outsider status was the panel’s title. After all, what self-respecting writers would want to speak on a panel named “Residents and Insiders”?

First of all, go visit Jacket Copy, if you haven’t already. Carolyn Kellogg presided over a host of helpful bloggers (including me!) that captured the spirit of the event.

It’s par for the course to mock the panel title. This happens annually. The moderator Veronique de Turenne commented on the vague title, comparing it to the names of floats in the Rose Parade. Andrew Sean Greer likened it to Prom Themes (Thought we should have a “Take my breath away” panel)

Greer: It’s always weird to talk about books most of the audience hasn’t read because you don’t want to spoil the twists. He talked about his research: How with his last book about Victorian times, everyone gave him shit about picayune details, but with this novel about San Francisco in the 1950s, no one’s corrected him. So he thinks he’s getting away with things. Writing Advice: Said the best advice he ever heard was from Janet Fitch on Oprah: A cliché is whatever you’ve ever heard.

Korelitz talked about getting hired at Princeton to be a reader for college admissions. She was straightforward, and told them when she was being interviewed that she wanted to write a novel. They still hired her, though she says they might regret it now. Writing Advice: There’s value in the time of “cooking.” Cooking is the period when you really aren’t doing things but yet are thinking and reading. (Also, if you have a satirical college essay, send it to Korelitz’s anthology: Funniest College Essays.)

Gina Nahai told a story of how she’d not been back to Iran in thirty years, even though she’d been born there, but assumed that if she could only see her childhood home, then all those memories would flood back. Recently, though, she heard from a friend that her childhood home had been torn down, and felt the loss keenly. She doesn’t really know where she draws her identity from, since she’s always been a minority in every culture (Iranian Jew in Iran and America). Writing Advice: “All you need to write is a computer and a door you’re willing to shut.” Quote Two: “The greatest writers are not the ones with the most talent, but the ones with the most persistence.” (and thanks for the shout out during the panel, Gina: yes, I read a ton)

Janet Fitch: “the kid who kills himself in [Paint it Black] is more me than anyone else.” She equates the suicide in the book to the death of her older ‘80s persona. In the book, the male character is told he shouldn’t make art because he’s only a good pianist, and there are too many geniuses. She felt enormous pressure, as a young writer during the 80s, to be a perfectionist, and so really related to the punk scene in L.A., when they didn’t care, they just wanted to make some noise. Writing Advice: “You should not only be reading, but reading like a writer.” A kid who goes to Magic Castle is oohing and aahing, but the magician in back studies all the moves and technique.

I’m very much looking forward to the Los Angeles Times Festival of Books this weekend. There’s a list of all the attending authors, but you have to wade through a lot of children’s book authors and commercial writers (not that there’s anything wrong with them) to sift out the good stuff. Might be helpful to allow people to search for authors according to certain criteria.

But I am particularly looking forward to these authors, three of which are accomplished short story artists:

RedFence: Los Angeles Times Festival of Books – Day One from RedFence on Vimeo.