43 Great Sentences That Will Blow You Away 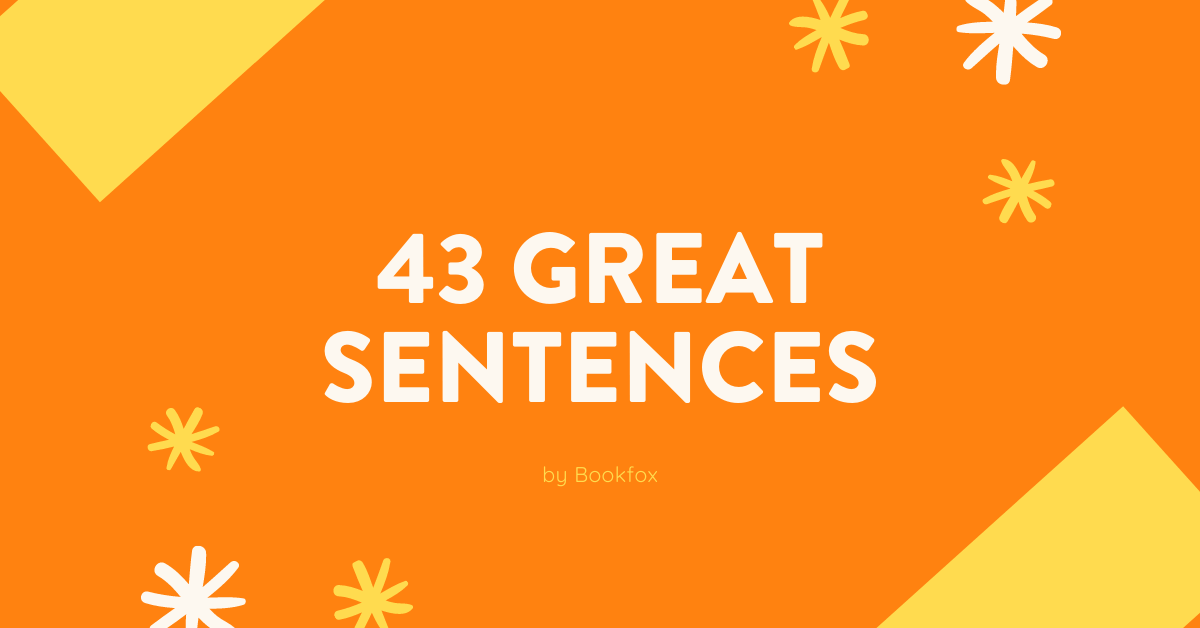 I love good sentences. I really do.

The best sentences are ones that show off brilliance without being show-offy. They pulse with the vitality of language and they aren’t any longer than they need to be.

Below you’ll find 43 good sentences. Solid sentences, sentences that you would be proud to bring home to Mom and Dad. Marriage-worthy sentences.

Ultimately, these sentences will repay your close attention. Under careful scrutiny, they will open up like flowers and reveal to you the wonders of the world.

I’ve spent years collecting the good sentences here in a file that I reserve for only my best sentences. I give them to you hoping that they will inspire to write more beautiful sentences, inspire you to read more looking for these type of gems, and that they will make your life just a little bit more gorgeous.

If you want a few more sentences, check out my post of 100 Beautiful Sentences.

I’d also encourage you to start a file with good sentences, too. Ones that rock your soul and upend all your expectations about language and about the world. You’ll never know when you might need inspiration.

If you love one or two of MOST of these, I would love to hear which ones struck you to the core.

Because ultimately, like all art and things pertaining to beauty, “good” is subjective. The only definition for good that I don’t like is one that doesn’t pay attention to language. Because for me, a good sentence isn’t just about whether the language communicates a great idea; a good sentence has to showcase the infinite flexibility and brilliance of language itself.

1. “His body was all spring and torque, a bundle of fast-twitch muscles that exuded faint floral whiffs of ripe pear.”

2. “Across the chasm the first sunlight clipped the western echelon of ruined mountains and cones of the badlands volcanoes at the edge of the world, and they were gray and red and gold in the moment.”

3. “I did not feel as if I were a person but simply a receiving station for a series of overwhelming transmissions.”

4. “Kissing was good, but he tended to think of it as a beachhead from which to launch more serious operations, and a safe haven when, inevitably, he was forced to retreat.”

5. “People and their dwellings were such a thin dust on the surface of the globe, like invisible specks of bacteria on an orange, and the feeble lights of kebab shops and supermarkets failed utterly to register on the infinities of space above.”

6. “But God is only a white cold eye, a quarter-moon poised above the smoke, blinking, blinking, as the city is gradually pounded to dust.”

7. “It is said that unless you are born a god, your life, from its very beginning, is a mystery to you.”

8. “The long evening had made its way into the barrack through the windows, creating mysteries everywhere, erasing the seam between one thing and another, lengthening out the floors and either thinning the air or putting some refinement on my ear enabling me to hear for the first time the clicking of a cheap clock from the kitchen.”

9. “I don’t want to fade away, I want to flame away – I want my death to be an attraction, a spectacle, a mystery.”

10. “I realised, of course, that other people used these roads; but that night, it seemed to me these dark byways of the country existed just for the likes of us, while the big glittering motorways with their huge signs and super cafes were for everyone else.”

11. “He seemed, like Albert Vetch, simultaneously haunted and oblivious, the kind of person who in one moment could guess, with breathtaking coldness, at the innermost sorrow in your heart, and in the next moment turn and, with a cheery wave of farewell, march blithely through a plate-glass window, requiring twenty-two stitches in his cheek.”

12. “It was hard to say what had depressed him more: the studied footwork of the couples on the dance floor, or the heartrending petty bourgeois piteousness of cucumber sandwiches passed around by accounting majors whose overly colorful bow ties had been expressly chosen to keep them from looking like waiters.”

13. “Fridrik sat many a night by a smoking lamp, translating into Danish descriptions of the latest methods of keeping us poor humans alive, while on pallets around him lay the corpses, beyond any aid, despite the encouraging news of advances in electrical cures.”

14. “His scarred, shaven face flattens against the mat.”

16. “The fights between pupils were sometimes violent, the humiliations brutal and cruel, and Jed, being delicate and slight, would have been incapable of defending himself; but word spread that he was motherless, and such suffering, which none of them could claim to know, intimidated his schoolmates; thus there was around him a sort of halo of fearful respect.”

17. “There were patches of blackened snow on the red-tiled roof, and through the black teeth of its towering chimney rose a column of lignite smoke; wedged between the triangle of the roof and the rectangle of the chimney was a bright blue sky.”

18. “Objects, their outlines beginning to harden in the growing light, had a shadowy, totemic menace.”

19. “When Jun Do had cordoned off the pounding in his eyes, and the hot blood in his nose, when he’d stopped the split in his lips and the sting in his ears from coming inside, when he’d blocked his arms and torso and shoulders from feeling, when that was all blocked off, there was only the inside of him, and what he discovered was a little boy in there who was stupidly smiling, who had no idea what was happening to the man outside.”

20. “A single note, held in an amber suspension of time, like a charcoal drawing of Icarus falling.”

21. “Nothing is random, nor will anything ever be, whether a long string of perfectly blue days that begin and end in golden dimness, the most seemingly chaotic political acts, the rise of a great city, the crystalline structure of a gem that has never seen the light, the distributions of fortune, what time the milkman gets up, or the position of the electron.”

22. “What is astonishing is that we, who had no idea how anything was going to turn out, now know exactly what happened.”

23. “The building’s rusted fire escape would just come down, just come loose from its moorings and crash onto the street, if anyone stepped on it – a fire escape whose function was not to save lives in the event of a fire but to uselessly hang there testifying to the immense loneliness inherent to living.”

24. “But it is just two lovers, holding hands and in a hurry to reach their car, their locked hands a starfish leaping through the dark.”

25. “The jeep would round the bend, be hit by a dozen bullets at once, and that would be the end of his petty history of unfocused groping and unimportant dissatisfactions.”

26. “It was so quiet, a reservation kind of quiet, where you can hear somebody drinking whiskey on the rocks three miles away.”

27. “How right that the body changed over time, becoming a gallery of scars, a canvas of experience, a testament to life and one’s capacity to endure it.”

28. “We are all waiting for the luminous hands that will reach for us in the night, the eyes that will witness our pain, the voice that will whisper the possibility of a different truth.”

29. “I am twelve years old, standing beneath a starfruit tree, standing on an asphalt path lined with banyan trees, their roots extending from ground to sky to ground again and forming great pockets of wild, empty space in the center of their root-branches.”

30. “The compasses are disappointingly true, pointing north over and over, when all he wants is for one to dissent, to demur, to show him the new direction he cannot find on his own.”

31. “He thought of his eyes on alcohol, gray coals in a brick-like face, a vicious mouth that lifted flesh from bone like a man field-dressed a deer.”

32. “Weston, alone and in their father’s car, sped from the edge of that highway in darkness and blew out the metal guardrail and warped the steel so it reached after the car like a strange hand through which the known world passes, the heavy dark Chevelle like a shot star, headlights that put beams in the night until the chassis turned and the car became an untethered creature that fell and broke itself on the valley floor.”

33. “The sun glints through the pines and the heart is pierced in a moment of beauty and strange pain, like a memory of paradise.”

34. “As someone whose days were defined by the ten thousand ways a human can hurt, she needed, now and then, to remember that the nervous system didn’t exist exclusively to feel pain.”

35. “There is no beyond, there is only here, the infinitely small, infinitely great and utterly demanding present.”

36. “Oh, dear God, you don’t actually have a brain, do you, it’s more a filigreed spiderweb, with little chambers in it where trained monkeys play the pipe organ.”

38. “And by habit they shortened their thoughts so that they would not wander out into the darkness beyond tomorrow.”

39. “The wind was picking up off the ocean now and the whole coastal scene had a bleak, abandoned look, as though Maine in November really belonged to the ragged gulls who wheeled over the sun-worn pier, and the humans had just gotten the news and taken a powder.”

40. “They rode on and the sun in the east flushed pale streaks of light and then a deeper run of color like blood seeping up in sudden reaches flaring planewise and where the earth drained up into the sky at the edge of creation the top of the sun rose out of nothing like the head of a great red phallus until it cleared the unseen rim and sat squat and pulsing and malevolent behind them.”

41. “Fabricated of supple brown leather by an esteemed New England manufacturer, the rucksack smelled richly, mysteriously of autumn leaves, grilled lobster, and the sweat and sperm of boys’ boarding schools.”

42. “A complying memory has obliterated many of them and edited my childhood down to a brief cinematic blur.”

43. “Deep in the muddled darkness six copper pheasant feathers glowed in a cradle of blackthorn.”

Thanks for reading these! I hope you found what you were looking for. Remember to leave a comment below about your favorite one (or your least favorite one!), or to list a good sentence that you think I missed.