Round and Flat Characters: A Guide to Writing Characters 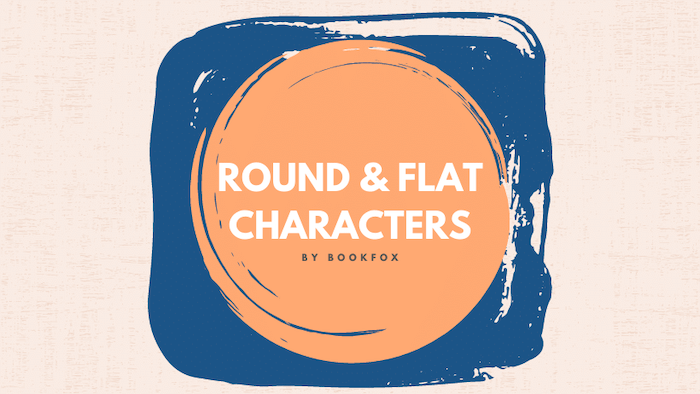 The keys to a story are the characters, and the key to characters is knowing the difference between round and flat characters.

When building a cast, it’s important to think about the function each character will have in the story. Their relationships to the other characters, especially the protagonist, will be the main factor that determines what type of character they should be.

Are there certain types of characters that are better than others? It depends. A better question might be, what is the best type of character for each role in a story?

We’ll get to know round and flat types, so that you as a writer are able to build the best possible version of the cast of characters for your next story.

In a recent Bookfox poll, we learned:

It’s surprising that so many writers always try to write round characters. I think this is a mistake, which I’ll talk about in the next section.

It’s also surprising that readers have such high expectations when they read a book, expecting that every character should be so wonderfully drawn — is there any room for minor characters?

It’s a myth that round characters are better and flat characters should be avoided. There’s room in your story for flat friends.

E.M. Forester, author of A Room With a View and Howards End, came up with the term in his book Aspects of the Novel in 1927 and recognized that both types of characters are necessary. He wrote, “A novel that is at all complex often requires flat people as well as round.”

Round and flat characters work well in tandem. Together, they create the full cast of a story. 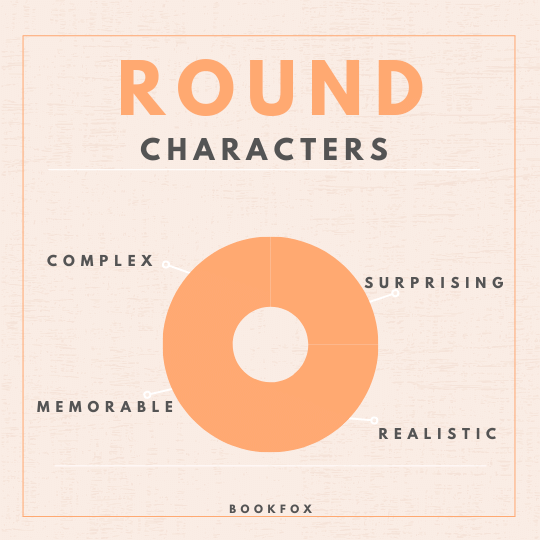 What is a Round Character?

Think of one of your favorite characters. What did you love about them?

Well, they were probably round.

Round characters have layers. They’re multidimensional. They have depth, and they’re complex figures that the reader can get to know them over the course of a story. This is why they’re often the most memorable characters and why they might stick in a reader’s mind as their favorite.

7 Tips for Writing Round Characters

1. Round characters can only be built over time.

E.M. Forster, when he invented the terms “round character” and “flat character,” said that round characters “are fit to perform tragically for any length of time.”

With round characters, we need the chance to get to know them.

That means it’s impossible to create a round character if they only get a few pages here and there in your book. It’s only through spending time with a character that the reader will feel like they are a real human being.

2. Round characters have to be surprising.

Forster argued that round characters need to be “capable of surprising in a convincing way.” Because they are not predictable, the reader feels curious and gets to learn more about them.

They’re more than a face we pass on the street, we spend time with them, they take up enough of the story to give the reader the chance to get a sense of who they are… and then feel surprised by them.

For instance, when Superman flies around the world to turn back time, that’s surprising:

A flat character can’t be surprising, because we assume that whatever they do is natural for them (we don’t know them yet). Only round characters can surprise, because they do something that’s beyond their surface-level personality and actions.

3. Round characters need to change in the eyes of the reader.

These changes make them intriguing and make them memorable.

4. Round characters’ actions have explanations.

Round characters have more reasons for what they do than flat characters.

They take a certain action or have a certain trait because of some fundamental part of who they are, or some event in their past.

Backstory and motivation can be helpful to think about when building out a round character.

If we know how a character came to be, this gives us a sense of their layers and depth. Like real people, round characters are complicated, and elements of their past can help explain why they do what they do.

These bits of background can all contribute to what a character chooses to do and why. And when that reasoning–the why–seeps into the story, that makes a character rounder.

For example, knowing that Hermione Granger in the Harry Potter series is from a non-magical family gives her depth. It helps explain why she’s a teacher’s pet and tries so hard in school. It tells us a lot about her personality and life experience.

For example, Shakespeare’s Macbeth is power-hungry when he murders the king to steal his crown, but there’s more to it than that.

7. Round characters have contradictions.

Good round characters feel like the Walt Whitman quote, “I contain multitudes.”

What are multitudes? They’re contradictions.

Take a look at Macbeth.

These opposing forces feel real and relatable—perhaps especially for those of us who have experienced imposter syndrome—and they draw us in. It’s what makes Macbeth feel true to life.

If we remember that our readers are complicated beings themselves, putting complexity in our characters reflects that part of real life and lives up to what Forster knows round characters are capable of.

The “Life” of Round Characters

“[A round character] has “life within the pages of a book.” – E.M. Forster

“Life within the pages of a book” is pretty much the highest compliment any writer could get on their work. That feeling is what readers love most about reading. And round characters are the way to get there.

All this combined is what is at the core of a good round character—they feel authentic. They feel like a real human person, in all their contradictory, complicated, messy, and beautiful imperfection. 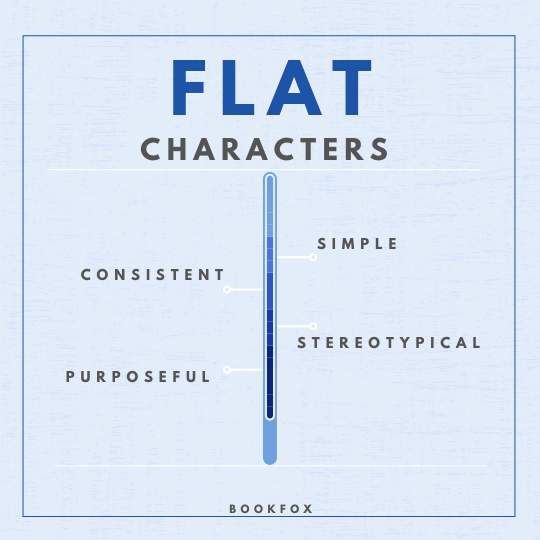 What is a flat character?

Flat characters are surface-level and one-dimensional. But this isn’t a bad thing—2D animation can be just as good as 3D animation.

Forster said that flat characters ought to be “constructed round a single idea or quality.” So we’re working with one high-quality single layer as opposed to the many layers of round characters.

If round characters are meant to be surprising, then flat characters should be predictable.

Predictability has its place in every story. If a hero is on a chaotic quest, that chaos will be emphasized if we catch glimpses of the normal everyday world and the people who live in it, the ones who are the opposites of our complicated round characters.

When should you write flat characters?

1. To fill out the world of the main characters.

Sometimes, flat characters are the ones we meet only for a moment, like extras in a film.

They make the main (round) characters feel more real just by being there and filling the world with extra life.

2. To write a certain genre.

Flat characters can be main players in a story, too, if you’re writing a certain type of book. Some great examples of active flat characters are all throughout these genres:

Flat characters like this often fit a “type” or trope and don’t stray from that stereotype.

This doesn’t mean that they’re bad characters—we love Little Red Riding Hood and the wolf, and it’s a story we tell over and over again. It just so happens that the type of story—a fairy tale—calls for the simplicity of a surface-level character to convey a direct and uncomplicated idea.

How to write flat characters well

Flat means a character is just “action/trait” without much justification behind it.

Flat characters should be easy for an audience to understand quickly. We know that character is nosy as soon as our main character spots them peeking through their curtains with their binoculars. Immediately, we know their type, we know their whole deal.

In the same way, with a fairytale character, we know that the wolf is bad as soon as he appears. It doesn’t take the reader long to catch on, and because the wolf is flat, we know he won’t surprise us at any point. The wolf isn’t a tragic anti-hero with a complicated past—he’s just a hungry, conniving villain.

Be intentional about flat characters

Have an idea of what function your flat character will serve in the story, and stick to that goal as you’re writing them. Functions for flat characters include expanding the world, advancing the plot, and serving as a foil for the main character.

Think of Romeo and Juliet.

Romeo and Juliet are round characters.

They also work very well in a very simple story like a fairy tale or myth. As long as they’re well placed in a narrative and/or genre, they’re excellent tools.

E.M. Forster said that the main problem with flat characters is not that they are flat, but that they “pretend to be round.”

If a writer creates a character thinking that they’re round, but the reader perceives them as flat, that’s the fatal error.

Flat characters only weaken your writing and make it seem simplistic and boring if flat characters end up in the wrong part of your story.

Yes, those are different than flat/round. The terms dynamic and static are often brought up when talking about round and flat characters, but they aren’t synonyms.

A dynamic character is a character that evolves over the course of the story.

A static character, as you might be able to guess, is the opposite.

Dynamic and static are subsets of round/flat. In other words, one of the things that make a round/flat character include such characteristics as dynamic/static.

So, mixing and matching is possible. Round characters might grow over the course of their story, but they don’t have to. And flat characters might remain the same throughout the plot, but not necessarily.

Again, it depends on what the character’s role in the story is as to whether they will be flat or round, dynamic or static.

When to choose round or flat characters

So, most folks agree on the basic concept of round and flat characters, but it’s tricky to tell when a character needs to be round versus when they need to be flat.

Round characters are are complex, surprising, and feel like real people.

Flat characters are simple, stereotypical, and serve a singular purpose.

Flat characters are usually in the background. They work well as supporting characters, or main characters if you’re telling a very simple story like a myth or parable. They’re simplistic and unsurprising, but this reliability can help to build the foundation of a story. While round characters might be more unpredictable, the flat ones are there to offer some stability.

Questionnaire to Help You Decide on Round versus Flat

If you’re struggling to figure out whether a certain character should be round or flat, answer these questions:

Don’t attempt to write all round characters.

Not only will it take up way too much time and effort, in the end your book will be weaker because of it — because the reader will be confused about what character they need to care about.

The trick is getting the right mix between round and flat characters, and striking that balancing act is one of the toughest jobs of the writer.

Different shapes, like round and flat, will fit together differently depending on the story you’re trying to create. Never be afraid to experiment with the tools you have—like playing colored wooden blocks when you’re small, writing is often at its best when it’s playful.

With any luck and with some strong character choices, your readers will come away feeling as though they’ve experienced something real and true to life within the pages of your book.