The Best Tips for Collaborative Writing 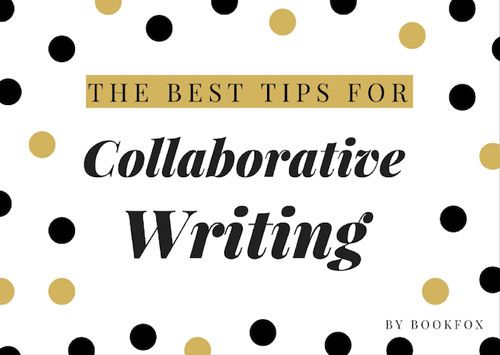 The first step to successful collaborative writing? Abandon the false idea that writers write better when they work alone.

People usually think of writers as quiet and brooding loners who separate themselves from society in order to write. The solitary writer is imagined as an introvert, alone at the desk. But this fantasy of what Linda Brodkey calls “the solitary scribbler” is a false stereotype.

What is collaborative writing?

Any time you’re writing with one or more other writers to create a work.

For example, “A Million of Penguins” is a novel written by thousands of writers. Is it good? No, because some people were sabotaging the writing and because it’s incredibly difficult to collaborate with so many other people. Your best chance is to collaborate with one other person, or two at most.

So why collaborate to write a book?

Networking because you’re getting to know other writers well, and those friendships are going to come in handy later.

Like a classroom because your fellow writers will challenge your perceptions of narrative, of characterization, and of plot. They will force you to defend your positions on why X should happen and Y should not. They will feed your imagination and help it in grow in ways that it couldn’t if you only wrote by yourself.

How can I make sure my collaborative writing partnerships are successful?

2. Know your strengths and weaknesses. If you’re fantastic at dialogue, then you should be writing dialogue and also editing your partner’s dialogue. If you’re great at

3. Be able to take critiques from your partner/s. Nothing worse than working with someone who thinks everything that flows onto their word processor is genius. Don’t be that person. If you’re working with the right person, taking critiques should be easy, because you’ll recognize that they’re right. If you constantly think they’re wrong, either you’re too stubborn or the partnership isn’t going to work.

4. Be flexible. Sacrifice some of your vision for the work in order to accommodate your partner. And have reasonable expectations that your partner will do the same.

5. Smooth out stylistic differences. Nothing is more annoying that realizing one chapter has a higher diction level than the next, because the writing partner’s prose styles were too different.
Resolve intractable disputes with an outside partner.

6. Agree on a referee. Agree on one person you both know outside the project, and agree to have them referee any disputes you have.

For instance, if both of you have a vision for the ending, and both of you think your vision is better, talk it through with someone outside the project and let them choose which way you should go.

7. Put it in writing. Write out a contract for how you will work together. Even if you’re just friends and don’t plan on making oodles of money, it’s helpful to have a written constitution defining your working relationship.

Make sure to define how things will be split after publication in terms of money and rights. But don’t forget the roles after the writing and before the publication, especially marketing. What marketing roles will each person take on? You don’t want one person getting stuck with all that work.

8. Define how the process of collaborative writing will work. Will you email drafts back and forth to each other? How often? Will you wait to revise until the end or do it as you go? What kind of pace will you take? (if one person write a chapter a week and the other struggles to write a chapter every month, that’s a mismatch).

Also, in this contract you should identify how you will split up the story if you have a falling out. Does one person get ownership of the story?

Does working with an editor count as collaborative writing?

Are there forms of collaborative writing where only one person does all the typing?

Yes. It’s well known that James Patterson doesn’t write any of his own books. He has a team of ghostwriters that work under him, and he merely sketches out the plot for them.

So technically they are the only ones doing all the “writing.” Sometimes he will look it over and make adjustments after they are done, but this is more of an editorial role than a creation role. Even though they are doing all the writing, I would call that collaborative because he is generating the outline and general plot idea.

If one member of your group is great at generating ideas, and the other is quick-witted when it comes to sharp dialogue and crafting beautiful sentences, then this type of partnership might work for you. But I find that it’s a little imbalanced, because the idea generator tends to have the power and the typist tends to do the lion’s share of the heavy lifting. After all, I can create the plot outlines for several books in a day, but it would take years to write them all.

That’s why people pay ghostwriters. Because one person has the story, but they want someone else to do the actual writing. That’s a popular for of collaborative writing, but since it’s not an equal one, one member pays the other.

Why is collaborative writing so popular in television and film and yet unpopular in literature?

Studios do this to reduce risk. They think that if they throw multiple writers at a project, it will have less chance of sucking. This isn’t necessarily true, but that’s not a mark against collaborative writing. It just means collaborating writing isn’t a magic potion that makes all writing good.

The way it works in television is that 10 writers sit in a room and shout out ideas. When an idea comes out that everyone likes, they add it to the board, and in this manner construct an episode piecemeal.

If it works for television and film, why wouldn’t it work for books? Sometimes the sum of several minds beats out the uni-vision of a single mind.

What are examples of good books written collaboratively?

Wandering around my local Barnes & Noble, I came across more co-authored books than I expected. Although there are TONS more, here’s a brief list:

In the children’s section:

What exercises can help me write collaboratively?

1. Write the opening line of a story, then pass it to the next person, and then the next person, around the circle. Every person gets to write a single sentence. This exercise, although simple and fun, shows that working together can make an original story even better.

2. In a group of three, write a story using a single sheet of paper. Write in a genre that none of you specialize in (if you like romance, do western. If you like sci-fi, do literary). Agree on each sentence before you write it down; get each word perfect, because you are not allowed to revise once it’s on the paper.

3. On a piece of paper, write down a plot outline of an opening scene, a conflict, and a resolution. Then trade it with your partner/s and have everyone write someone’s else’s plot outline.

4. Write down a list of 5 words and sketch one image (It can be ugly. It can be stick figures. You don’t have to draw well). Trade it with your partner/s and write a story based on those 5 words and the image.

5. Ask your partner to tell you a personal story. It could be from their childhood, or from their teenage years, or later, but it should be personal, and it should be something they remember well. After they tell it to you once, you go and write it down. As you write, you change the story by incorporating elements from your own experience. Maybe you add in your cantankerous drunkard of an Uncle, or the time you pulled your hamstring while jumping on a trampoline. When you’re finished, give it back to your partner and have them edit it.

6. Talk through an outline with your partner. Then you write the first half and they write the second half. Without either of you looking at the other person’s work, you give it to a third person who can change and edit anything they want. When the third person is finished, they should read it out loud to the first two people.

What do writers think about working together?
Douglas Preston and Lincoln Child have been writing together since 1990, when the pair met at the American Museum of Natural History in New York. They are commonly asked how they co-author their books.

Q. How do two people write a book together?
A: That’s an organic process that’s been changing since we first started work together. These days we tend to work up a detailed outline together, passing it back and forth via the cloud until we’re happy with it. Then we assign sequences, or related sets of chapters, to each author. The other authors later revises these chapters. That way, we tend to get four hands on just about every word.

Q: Do the two of you ever have differences of opinion?
A: Of course we do! Sometimes, we argue like an old married couple. But this is a very good thing, actually. The bottom line is, we trust and respect each other’s opinion. The finished books are much better as a result of our always questioning each other’s work, trying to find the best possible way in which to write the story, and so on. And with two heads at work, with twice as many ideas to choose from, our books should be twice as good. Right?

The bottom line? You CAN write collaboratively!