The Power of Quitting: Why Every Writer Should Learn to Quit 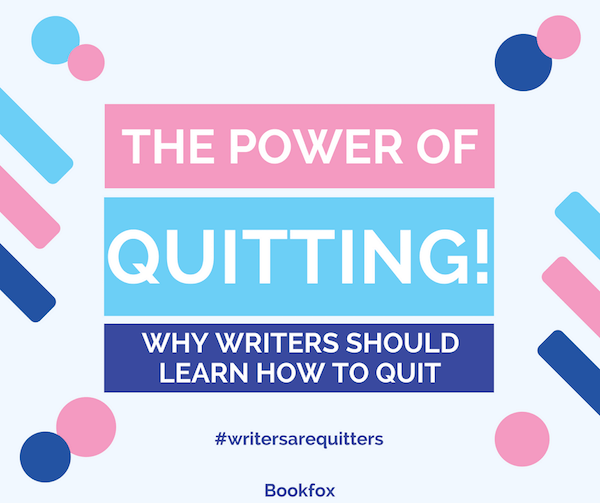 When I was 31 years old, I’d been laboring over a novel for 5 years.

It was a quagmire. I was hopelessly stuck in a plot that wouldn’t move, in characters that couldn’t elicit sympathy, and with ambitions that were far beyond my skill as a writer.

When I’d started the novel, I had a grand vision that hadn’t played out on the page. I’d dreamed up a magnificent castle and built a ramshackle hovel.

Scenes were randomly scattered over 50-odd different files. I had far, far too many characters. I couldn’t find an ending.

But here’s the thing: I wasn’t a quitter.

I thought that only losers quit.

This story shaped my identity: When I was in high school, I tried out for the JV basketball team both as a freshman and sophomore – and didn’t make the team either year. And this was not a super competitive, 2000-member high school. My graduating class was 30 kids. Nearly every male in school played sports. Still, I did not make the cut.

So what did I do, being a determined, never-give-up, dig-your-heels-in type of guy? 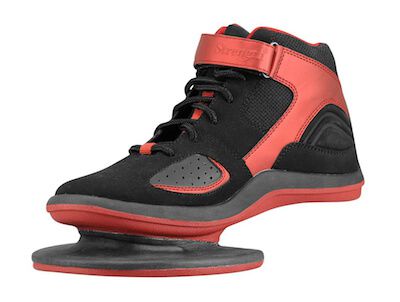 I went out and bought strength shoes. Does anybody remember these from the early 90s? They had these columns from the toe that went down to a rubber, 5-pound weight. Basically, it put all your body weight on your toes, and this was supposed to turn you into superman.

The shoes promised you could dunk after using them for 6 months. I thought if a 6’ dude like myself could dunk, the coach would be awed beyond belief and beg me to start every game.

So I followed the 20-exercise guidelines on the two laminated pages that came with the shoes.

I ran up bleachers. I jumped onto boxes. I ran figure eights. I jumped rope. I did high knees. I sprinted. 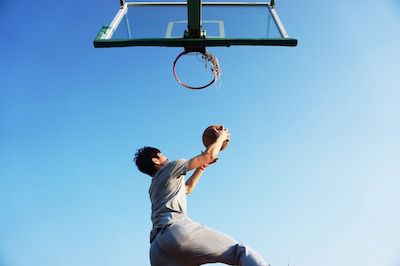 I’m sorry to report that I never did gain a huge vertical and lay down a vicious dunk on my slack-jawed classmates, hanging on the rim for emphasis as I said, “Sure you want to cut me this year, suckers?”

But I did get much, much faster. So with that speed and learning how to draw fouls (I was very good at flailing my limbs and falling down), I became a great driver.

And guess what? I made the JV team my junior year, and started scoring 20 points a game (Take that, Coach Long!) In fact, I was so good they moved me up to varsity in the middle of the year. And my senior year, I started every single game.

So you can see the lesson I learned. If you can become the type of person that doesn’t give up, and you work very hard, you can get what you want.

And that was the lesson I applied to writing. That was why after 5 years I hadn’t quit my first novel. Because I thought if I trained hard enough, if I really put my typing fingers to the grindstone and threw enough hours at it, I would eventually have a breakthrough and score an agent and get a huge advance and become wildly famous and adored by readers everywhere.

This was a dumb approach.

Quitting, as it turns out, is one of the best skills you can have as a writer. 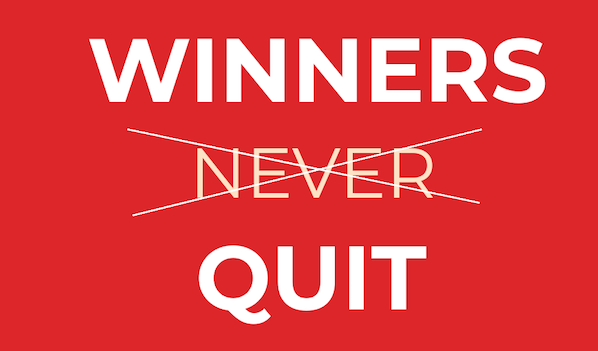 And I’m not talking about Capital Q Quitting, like quitting all efforts to be a writer and becoming a belly dancer or intellectual property rights lawyer.

I’m talking about lower case quitting. Here are the three types of quitting skills you need as a writer: 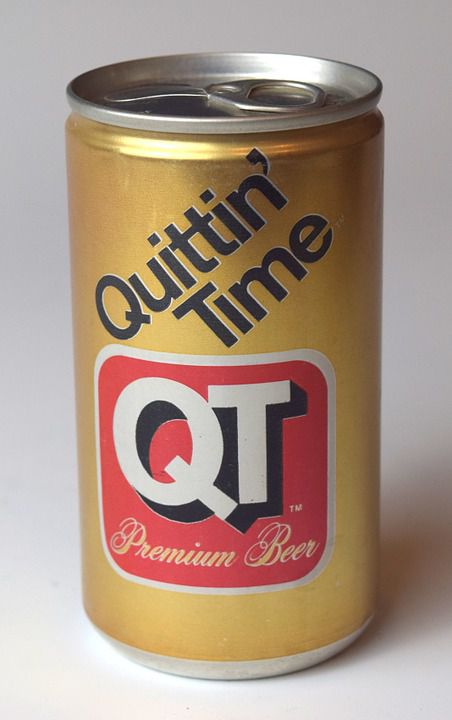 First, let’s talk about quitting projects. It was the best decision I ever made to quit that novel. One day I decided to throw it all away, and the next morning I started a new novel. I finished that new novel in two months. Boom!

I had to quit in order to free up my brain to create something else. Sometimes when you’re in the weeds, it’s much easier to start over than to salvage something which is fundamentally broken.

In fact, if you read thousands of interviews with professional writers (I have!), nearly every single one of them has a story of a novel they have thrown away or abandoned. Here’s the most surprising thing: quitting is not the realm of the amateur, but of the professional! Professional writers are professional quitters. All the best writers know when to quit, and quit frequently, because they can understand when a book isn’t working.

Jonathan Franzen worked on a book for years after the Oprah-blessed “Corrections” came out, and he tossed the whole thing in a dumpster.

After the success of “White Oleander” and “Paint it Black,” Janet Fitch worked on a historical novel for several years before calling it quits and writing her 3rd novel.

I’ll say it again: professional writers are professional quitters. Knowing when to quit your book is one of the hardest, yet wisest thing you can do. 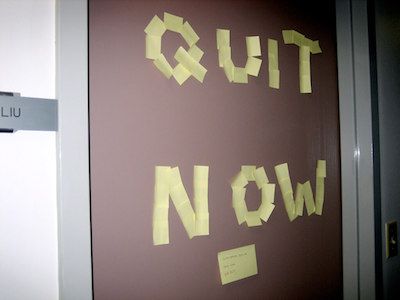 Second type of quitting: quitting your method or approach.

For the longest time, I wanted to nail a spot in one of the top 10 literary magazines. And I got so close. Oh man, the rejection letters I got were so nice I framed them and texted them to my mother.

But over a span of about 8 years, I racked up 1500 rejections from literary magazines. And here’s the thing: when I did score a win, it often came with a gigantic win of a “contributor’s copy.” Woohoo! I spent months of my life and two years of submitting to land a story in a journal that 3 people read, and that I actually lost money publishing.

For me, writing was about the prestige of these literary magazines. That was the route I needed to take to become a writer. That was what my MFA program had funneled me towards. That was what Poets and Writers told me to do. That’s what my fellow writers were doing.

So I quit cold turkey. I simply decided, after I’d won some contests and published my first book of short stories, that I wasn’t going to write any more short stories or submit to literary magazines again.

I wanted to hunt the big game of novels.

Quitting that methodology of becoming a writer was the best thing I could have done for my writing career. I simply abandoned that strategy and choose a completely different one: writing for an audience, rather than prestige. Writing for a wider group of people than other writers. Writing something other people want to read rather than writing to impress others.

It might be stopping the evaluation of your writing career on the basis of money or fame, and starting to evaluate them on the basis of self fulfillment and reaching a small pool of readers in a deep way.

Whatever it is, find it. Go to a conference. Talk to other readers. There are many paths that lead to the writer’s life. Don’t get stuck on just one. 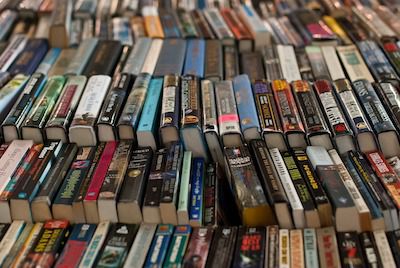 Switching genres can be such a career boost for writers. Look at John Banville, how he stopped the arch prose of his highly literary novels and just pounded out some excellent crime novels under the pen name Benjamin Black. He earned 50x the amount of readers because he switched to a new genre.

Or my friend Shann Ray started writing short stories, then went to poetry, then novels, then poetry again. Switching between genres has strengthened his writing muscles, so when he goes back to fiction after writing poetry, his prose is more muscular. And plus, he gains a different audience when writing each genre, and they become aware of his other books.

If you haven’t had success with a genre – literary, sci-fi, romance, fantasy – try changing it up. Write something that you’ve never written.

Here’s a confession: I once got so bored with the literary genre I wrote an erotica short story. It ended up being one of the funniest pieces I’ve ever written. Erotica is a great pleasure to write, and I never stopped laughing. Have you ever tried? It will truly teach you how not to write a sex scene.

And I think trying out erotica for a short story loosened up some of my writing muscles. I was able to return to my real project and break through. In that case, I just needed to quit for a second before returning to my goal.

Just remember, quitting doesn’t have to be permanent. Sometimes the quitting is only for a time. For instance, seven years later, I’ve taken the idea of that first novel and tried to write it again (from scratch!). 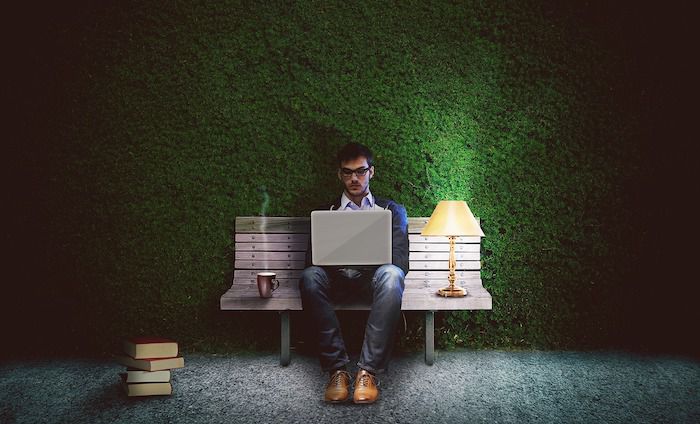 Why do writers hate quitting?

It’s because we love ourselves too much. It’s because we want to think of ourselves as constantly victorious, able to triumph over the words on the page, and able to use our mighty wills to bend the story to our whims.

But sometimes, you just have to admit your own limitations.

Sometimes, you have to acknowledge that language – the warp and woof of syllables and sentences – is greater than you are, and that you are its servant. 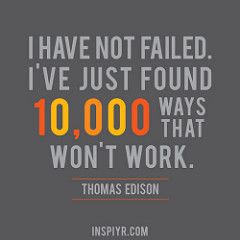 I am here to tell you that it’s okay to quit. You’re not going to stop being a writer if you abandon your current project. You are not going to be a failure if you switch tracks.

Listen to me: it’s okay. Don’t feel guilty. Don’t feel like you’re a failure. Think of it using one of the euphemisms the military would use about retreating: it’s a “tactical repositioning.”

You’re not running away from writing, you’re just choosing to run in a different direction.

Ultimately, the writer who is too proud to quit is going to get stuck. If you’re stuck, please try the one thing you thought you couldn’t do: quit.

Do you have a story of how quitting made you a better writer?

Or have you quit a project, method, or genre? I’d love to hear about it in the comments.

Be a smart quitter. Quitters are the winners (I want a T-shirt with that line).